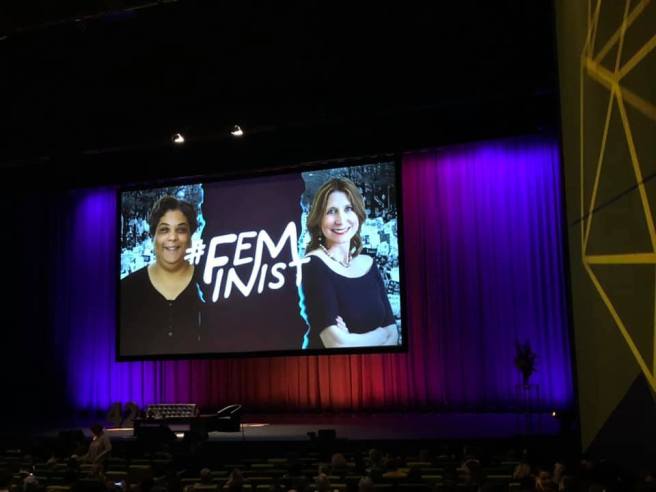 At the end of last month, I went to see Roxane Gay speak in conversation with Christina Hoff Summers which was an event put on by This is 42.

Gay has become of my favourite modern feminists due to her writings which are on point and full of wit.

Hoff on the other hand is someone I had never heard of until I heard her speak at the event. Despite calling herself an equalist feminist, I dont agree with her skewed perception of her personal brand of “factual feminism” as its quite anti-feminist (due to things like challenging women to prevent themselves from getting raped, which was one of the gems she shared with us that night, instead of educating people not to rape in the first place!).

From the outset Hoff monopolised the conversation and dominated it with constant excuses defending the rights of men, highlighting the “me too” movement which has taken things too far, in her opinion.

Gay on other hand, was articulate and an empowering representation of feminism.  Quietly contemplating (with the most amusing expressions and mannerisms to show her thought process) on what was being discussed and sharing her voice in a direct yet eloquent manner, when the opportunity presented itself.

With that said, I have to admit I go to a lot of feminist talks and NEVER in my life have I ever seen so many people walk out of a speaking event.

To say the event put on by This is 42 was a complete and utter shit show, was an understatement, with one person going so far as calling it the “Fyre Festival of Feminism” on the event Facebook page.

The organiser/owner/moderator of This is 42 Desh Amila, moderated the event, quite poorly from my and many other attendees perception.  He asked quite vague questions which are on trend, as if he googled “what are the main feminist topics of today” and didn’t allow both speakers equal speaking time which made the event quite skewed. Desh actually posted something about it on the This is 42 Facebook page a week later to explain the controversy following the event.

No apology was given and Desh basically talked himself and the event up stating really irrelevant things which simply self promoted.  The thing which took me offside with the host to begin with, was how he started the event.  He came on stage and made a penis joke due to being a male hosting the event, coupled with lame excuses as to why couldn’t get a female host.

The video footage Desh created a week or so later was worse, confirmed the opinion myself and many other attendees made of him, which is that of an arrogant self centered businessman making it all about himself and how awesome he is.   Relax guy, you aren’t Steve Jobs and it wasn’t a Ted Talk.

My favourite quotes of the night:

“How about we move beyond the debate about whether women are people.”