The Digital Writing Festival is happening from the end of this month.

The Digital Writers’ Festival takes place online, on their website.

Log on and tune in to join the conversation, wherever you are.

The Melbourne Writers Festival is happening in Melbourne, Australia from 30 August till 8 September.

This year’s Festival theme is “When We Talk About Love”.

At the end of last month, I went to see Roxane Gay speak in conversation with Christina Hoff Summers which was an event put on by This is 42.

Gay has become of my favourite modern feminists due to her writings which are on point and full of wit.

Hoff on the other hand is someone I had never heard of until I heard her speak at the event. Despite calling herself an equalist feminist, I dont agree with her skewed perception of her personal brand of “factual feminism” as its quite anti-feminist (due to things like challenging women to prevent themselves from getting raped, which was one of the gems she shared with us that night, instead of educating people not to rape in the first place!).

From the outset Hoff monopolised the conversation and dominated it with constant excuses defending the rights of men, highlighting the “me too” movement which has taken things too far, in her opinion.

Gay on other hand, was articulate and an empowering representation of feminism.  Quietly contemplating (with the most amusing expressions and mannerisms to show her thought process) on what was being discussed and sharing her voice in a direct yet eloquent manner, when the opportunity presented itself.

With that said, I have to admit I go to a lot of feminist talks and NEVER in my life have I ever seen so many people walk out of a speaking event.

To say the event put on by This is 42 was a complete and utter shit show, was an understatement, with one person going so far as calling it the “Fyre Festival of Feminism” on the event Facebook page.

The organiser/owner/moderator of This is 42 Desh Amila, moderated the event, quite poorly from my and many other attendees perception.  He asked quite vague questions which are on trend, as if he googled “what are the main feminist topics of today” and didn’t allow both speakers equal speaking time which made the event quite skewed. Desh actually posted something about it on the This is 42 Facebook page a week later to explain the controversy following the event.

No apology was given and Desh basically talked himself and the event up stating really irrelevant things which simply self promoted.  The thing which took me offside with the host to begin with, was how he started the event.  He came on stage and made a penis joke due to being a male hosting the event, coupled with lame excuses as to why couldn’t get a female host.

The video footage Desh created a week or so later was worse, confirmed the opinion myself and many other attendees made of him, which is that of an arrogant self centered businessman making it all about himself and how awesome he is.   Relax guy, you aren’t Steve Jobs and it wasn’t a Ted Talk.

My favourite quotes of the night:

“How about we move beyond the debate about whether women are people.”

The Digital Writing Festival is happening from the end of this month.

The Digital Writers’ Festival takes place online, on their website.

Log on and tune in to join the conversation, wherever you are.

October 1, 2018October 1, 2018 ~ tinaaltman ~ Leave a comment
Last month, I went to see Germaine Greer speak on her publication, “On Rape” by Melbourne University.  I call it a publication as its essay length. 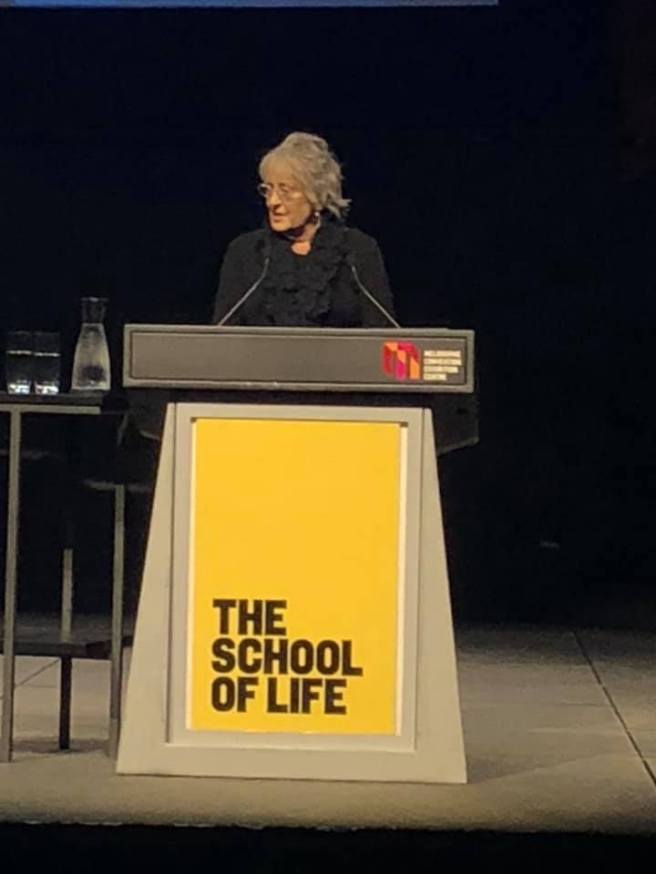 Greer’s book “The Female Eunuch” was the first book I read on Feminism. Although its incredibly dated, at the time (I was just out of my teens) it was a revelation, even though I didn’t agree with all of it.

Over the years Greer’s stances and opinions on things have become more and more skewed from my personal philosophy on what Feminism is.  Therefore I have moved away from her work as I don’t see her as a role-model or person of excellence in the field even though she placed herself as a pioneer feminist during the second wave.   I personally don’t feel she’s an activist like one of my idols Gloria Steinem who I saw speak and inspired me very much.

Suffice to say the event put on by The School of Life didn’t inspire me and in fact left me thinking – wtf Germaine?!?!

From the outset Greer was vague, defensive and refused to answer questions purposefully derailing the conversation and changing the subject.

I couldn’t find a single element of her talk which I agreed with and I felt like the whole thing was created to draw controversy in order to get people to read her essay.  I would of appreciated it moreso, if I didn’t have to pay for a talk which was simply an advertisement for her essay.

Like the majority gathered there, I attended as a curiosity and was left laughing at her not with her and the most interesting aspect of the talk was when a small handful of protesters interrupted about 1/3 of the way through.

I won’t quote what stood out as inspiration because all that stood out is how NOT to be a feminist in my opinion. At least now I can say I have seen her speak.

My parting words on this is that I have moved past her work and will continue to focus on feminist writers who inspire and keep the movement progressing.

Rosalie Ham the author of The Dressmaker taught at *Wordfest2018.

I was lucky enough to be able to attend her creative writing workshop and sheepishly asked her to sign my book at the end of the class, which she was only too happy to do!  She commented it was lovely to sign a real life physical book and wished me luck with my writing.

.  Overall I am glad I attended it was one of the best workshops I have attended at a writing festival.

*WordFest is the annual literature festival of the Monash Public Library Service. The festival brings readers and writers together for a series of author talks, writing workshops and competitions.

The Melbourne Writers Festival is happening in Melbourne, Australia from 24 August till 2 September.

Thought I would try a new yet interesting approach to this year’s reading challenge:

20th of October is the National Day on Writing.

For me writing is a form of therapy…it helps me get all the stuff churning in my mind on paper which is extremely freeing.

The National Novel Writing Month is happening in November.

“National Novel Writing Month (NaNoWriMo) is a fun, seat-of-your-pants approach to creative writing. On November 1, participants begin working towards the goal of writing a 50,000-word novel by 11:59 PM on November 30.”

Free free to add me as a buddy as I have signed up for the first time and would like to be inspired by others participating also: